The first marbled winter white appeared in my hamstery on the 4th November 2003. The entry in my record book says, ‘Juliet and Shakespeare 4.11.03 5 female, 2 male sapphire, 1 female born with lots of winter moult colour’. This was not the first time this had happened in my hamstery but it was the first time I didn’t send the baby to the pet shop with all the others but recorded it and kept it to see how it developed. I’m not saying the others were marbles, they may have had genuine winter coats, I will never know but I could kick myself and I learnt a valuable lesson (record and keep interesting observations/ hamsters).

Juliet and Shakespeare were both sapphires that I had bred myself, in the lines were stock from David Baglin, Melissa Chamberlain and Finland. Anyone interested in a full pedigree is very welcome to one. I called this first marbled sapphire ‘Rhubarb’ and the litter brother I paired her with ‘Custard’. I also kept another male and female from the litter, this was Juliet and Shakespeare’s 4th litter out of a total of six. They did not produce any more marbles.

Rhubarb and Custard had their first litter on 17.3.04 and in it were 4 sapphire males, 1 sapphire female and 1 marbled sapphire female who I kept in a colony named ‘Spain’. Rhubarb and Custard had four litters and produced 18 babies of which 9 were marbled sapphires. I kept all 18 babies and split them up into various breeding pairs and small colonies. On the 13.9.04 a colony of 2 sapphire females and a marbled male, named ‘France’, all from Rhubarb and Custard, produced their first litter. It consisted of 3 female marbled sapphires, 1 marbled sapphire male and a sapphire female. I had now got a good number of marbles and it was important to outcross some of these babies to my other lines of winter whites and under controlled conditions let some stock out into the fancy. If my hamsters should contract an illness and be wiped out the new colour would not be lost. I gave Jean Tye two marbles and two went to Melissa Chamberlain. By now I knew the gene to be dominant and wanted Jean and Melissa to outcross the Marbles to animals from their own lines of winter whites. Within my own hamstery I was very careful to still keep my established lines of winter whites separate from this new colour in case any health or genetic problems should occur within this new colour.

When new colours first appear and are inbred to produce more of the same problems can occur. The only thing I noted in my breeding records were sore eyes in some of the babies that the ‘France’ colony produced. These were kept bathed with salt water and had cleared up by 5 weeks old. 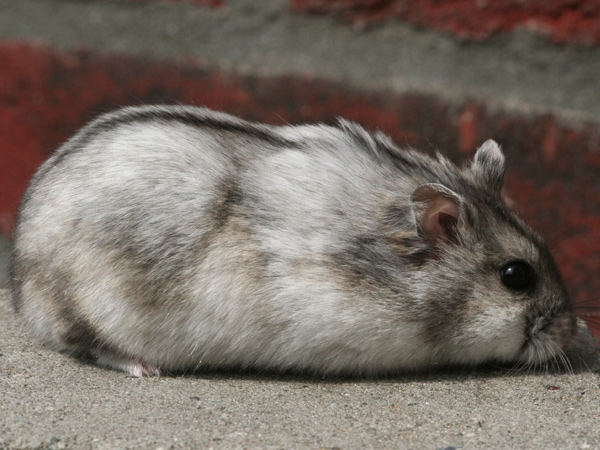